Hale Koa is a military hotel here in Hawaii. It is located in Waikiki. It serves the military members and their families. It consists of 11 floors, with 36 rooms per floor.

This project is a design-build project for the U.S. Government

Project challenges
1. Original Request for Proposal specified that the work is to be performed floor by floor. Due to the scope of work, the challenge would be replacing the plumbing and HVAC while maintaining use of the building for guests. This mean shut down and draining of the risers daily and constant service interruptions. With the help of the General Contractor, Haskell, the schedule was revised to work on half of the hotel at a time, leaving one half fully operational for guests to use. This allowed all of the utilities, water, waste, HVAC to be completely shut down during each of the phases.
2. The cooling towers were built in such a way that there were existing concrete trusses installed above the cooling towers to act as sound baffles. This eliminated the possibility of hoisting them out vertically. We were able to design a steel “table” that was used to drag the cooling towers out of the enclosure, allowing the crane enough clearance to hoist the old one away and the new one into place. Since the hotel was half unoccupied, the system was able to be run on 50% and one cooling tower was replaced at a time. 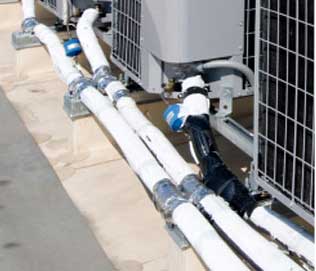 With this year marking 45 years in the construction industry in Honolulu, Hawaii